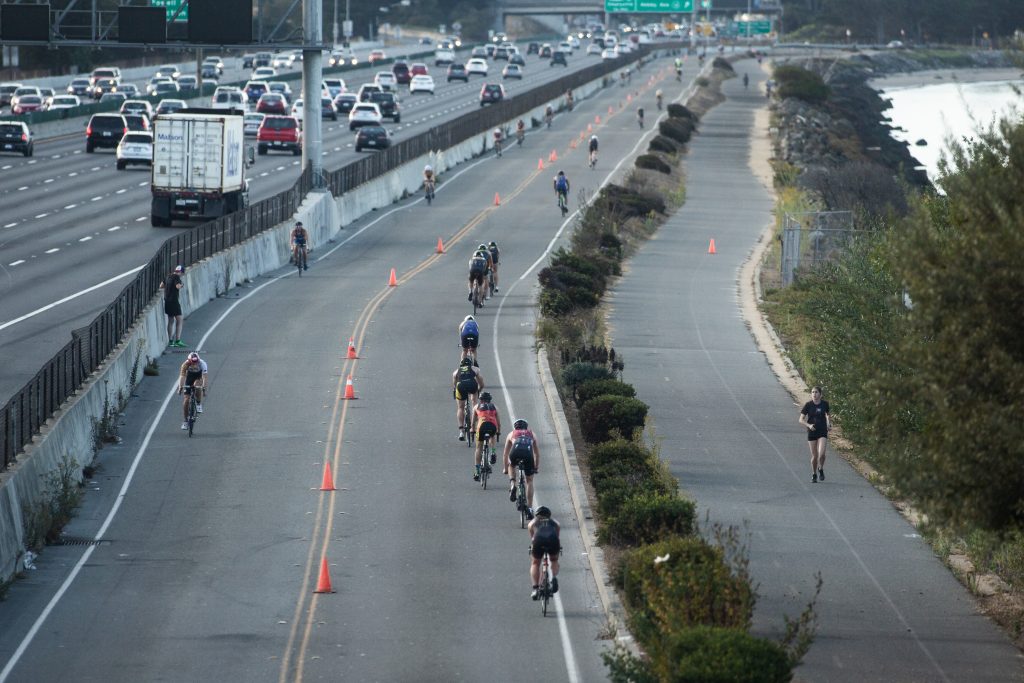 We left Saturday morning around 7:30 am from UC Irvine and started our six-hour drive to Berkeley. Drew, Brody, Madeline and I were all excited to be off and heading to out to the first WCCTC Triathlon of the 2018/2019 year. Due to factors such as the travel distance, the time commitment, and the fact that we hadn’t actually had started officially training, only three of my teammates (and one graduated teammate) were competing today. Nevertheless, with the bikes loaded, bags packed we made our way to the bay. Well, the bags were mostly packed, unfortunately, after driving for an hour I had the sudden realization that I left my tri-suit at my apartment. Thankfully I had a speedo to race in the next day, so we decided to just continue onwards rather than wasting time returning back. After our drive up, we picked up our packets at Sports Basement in Downtown Berkeley before heading out for a spin on the bike through the Berkeley hills to stretch our legs after a long car ride. Jonathan, an athlete from Berkeley was our tour guide and took us through the hills, heading out from campus up to Grizzly peak along Tunnel Rd. and out towards Inspiration Point. It was a beautiful ride, and we all loved being able to spend some time not stuck in the car. Hills, views of the city, and awesome teammates. 20 miles of hills may seem a bit much the day before a race, but the riding was so good it was hard to want to cut it short. After getting a good ride in we headed back to the East Bay, loaded up on pasta and watched a movie before settling into bed for the night. We all had trouble falling asleep, usually, I don’t have any pre-race jitters but this time I was just so excited to get back into racing after the summer break.

My watch buzzed, and I woke up. 4:50. Just enough time to enjoy a quick breakfast before we had to make our way back to Berkeley to the marina for the race. The temperature was nice, not too warm nor too cold. The day was clear and crisp. It looked like a great day to race. Once we set up our transition spots I speedo-d up and jumped into the bay for a warm-up swim. Although I was racing in a speedo, I was thankful I still had my Roka wetsuit or else swimming in the Bay would have been freezing. Fellow UCI athlete Brody Cormier and I were in the first wave while Drew was in the 2nd. My wave lined up in the water waiting. The official notified us what the start sound was and after a short countdown we were off swimming towards the buoys through the swim course. I was one of the first out of the water and I was intending on holding my lead as long as I could. The bike was a five-loop course with a total of ten U-turns. My goal was to maintain my lead until the first of these turns. I had been ahead after the swim in past races yet leading the bike leg had always proven to be a short-lived experience. I managed to hold a lead around the first turn, but I was unable to hold it for long as several other strong cyclists including Brody were catching up. When I finally dismounted my bike and transitioned into the run, I was only a few minutes behind Brody.

Trying not to worry about how many people would pass me in my worst discipline of the triathlon, I took a quick drink of water and took off on the run focusing on setting a solid pace which I could hold for five kilometers. Thinking I was doing just that, I soon learned that I was mistaken. I got a massive side ache, I cursed taking that sip of water and tried to keep a good pace. I struggled. As every athlete knows, racing is a painful and mentally challenging experience, the chanting crowd cheering us on really helped me push through the run. Luckily, the pain eventually eased, and I was able to keep my pace well below the 7-minute average goal I set for myself.

My overall time was a sprint Triathlon PR so I was very content with my race results. Brody finished within the top 20 and thanks to an amazing bike on his new Trek bike and Drew finished well too. I was happy with our teams result but mostly, I was happy because of the energy in the air. The entire team seemed to be stoked, but more than that, everyone at the race seemed to be giving off a positive vibe. Competing teams cheered on each other, and even competitors shouted encouragement to fellow competitors on the course. UC Irvine showed up to Cal with not many people, but we showed that although we were small we’ve got bite. Practice is officially starting soon and if this race was representation of this season, I am excited for the year to come!