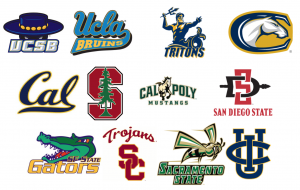 The West Coast Collegiate Triathlon Conference (WCCTC), founded in 2005, is an association of the colleges and universities within the USA Triathlon’s Southwest Region of the United States, which is comprised of the states of California, Nevada and Arizona. The WCCTC is recognized as the governing body for the sport of collegiate triathlon for all schools within California, as well as member schools in the states of Nevada and Arizona. WCCTC management is located in Santa Barbara, CA.