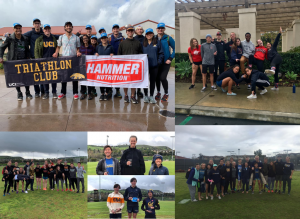 We just finished wrapping up our Zot Trot reverse triathlon event this year and I’ve got to say I think it went pretty well. This being my first year as race director, I naturally had a lot of doubts as to how it would all come together. However, despite some difficulties, I found a nice balance between my personal life and the event to help pull off a successful race day.

After helping out at my first Zot Trot last year, we realized a new race director would be needed to coordinate this year’s race as the previous director would be graduating. To be perfectly honest, I did not sign up for the position and I was actually more thrown it into it than anything else (thank you Jesse) but I soon became enthusiastic about the endeavour.

In planning, I had help from not only last year’s race director but also my team. Despite this, I still faced a lot more obstacles than I anticipated. It turns out there is a lot more that goes into these races than I ever expected. In the months leading up to the event, I kept an open dialogue with our team as we made progress in putting it all together. We focused some of our efforts on social media presence to get the word out about the race, and other efforts on figuring out logistics, including road closures, renting bike racks for transition, organizing the day-of details with the recreation center, and making sure all safety and medical emergency plans were in place and sorted out.

The day before the event, our team got together to set up the course and begin the pre-registration process. This is when we realized that the constant rainfall throughout the week and a moderately high chance of forecasted rain might prove to be an issue on race day. If it did rain and we continued with the bike course as planned, we ran the risk of cyclists crashing on the course’s several sharp turns. As athletes were picking up their packets and several inquired about the possible rain, we decided to come up with a backup course which would forego the bike.

Race morning came with a fresh torrent of rain, soaking the course. This forced us to make the difficult decision of changing the triathlon to a run, swim, run. It took a while to confidently make the call as I was worried participants may be disappointed. But in the end safety is our primary concern and the bike leg was officially called off. We kept the first run and swim courses the same and made the addition of a 3k run to make up for the canceled bike leg. The course was wet, but it was inspiring to see all the amazing athletes come out as optimistic as ever to race. In the WCCTC collegiate division, several teams including UCSD, SDSU, Cal, CSULB, UCSB, and USC came out and raced hard. The age group division and 6k race also had a great showing – with the youngest athlete being 10 years old and the oldest being 67. We had a total of 143 online registrations this year and every single one of them seemed to have a good time. Overall, I would say race day went well with the only major setback being the rain. I was very pleased that both our volunteers and athletes were able to overcome the poor conditions with a positive mindset and have a great race. We would like to give a huge thank you to our team sponsors Hammer Nutrition and Zealios Sun & Skin Care for donating prizes and gear which were awarded to race winners.

Through the race planning and the event itself, I gained experience in not only juggling tasks but also managing and leading a group of people. With these skills, I will be able to continue taking on leadership positions, not only on the team but around the school as well. The position definitely required a lot more time than I had thought it would, but keeping busy and having things to plan out helped me with time management even in my personal life. When the time for Zot Trot comes around again, one of my main goals for next year’s race is to bring vendors out to the race. With these vendors, we believe that participants will feel more refreshed and become more inclined to participate in future races. This year, due to time constraints, we were not able to proceed with the vendors, but we plan on working closely with them next year! All in all, I have learned a lot and can’t wait to work with the team again next year to host another amazing Zot Trot!