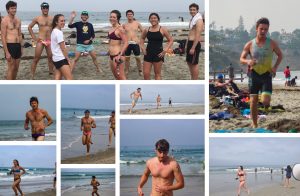 I had planned to sleep in Sunday and take advantage of the late start time, but I should have known better — at 5:30 AM, I woke up filled with excitement at the prospect of both my first collegiate race in several years and a swim in the ocean! After a leisurely breakfast and coffee I met everyone at the ARC; Jesse, Isabelle, and I drove through the fog accompanied by Van Halen and Rush. We arrived at packet pickup early, with ample time to retrieve forgotten IDs, meet Drew’s dad, and wonder where Chris was. Eventually we grabbed our chips, staked out space in transition, and sang Happy Birthday for Drew, which I know he loved. On the warmup run, we dodged divers emerging from their class and leftover excavation from sand castle construction, which was a good preview of what was to come. Finally, (at last!) it was time to try the water and find the turn buoys. Turns out the water is a lot colder when you’re completely submerged than when it’s just your feet in. But I was wet now and fully committed to my no-wetsuit plan. Isabelle and I got back to transition just in time to put the finishing touches on our kit — the Avengers icon, to channel Black Widow’s precision and Hulk’s power. Victoria learned how to make an IG story and we all got to be in her first one!

After some initial confusion, we lined up on the beach and confirmed the course; in an attempt to not be in front of the tall men next to me I wound up at the back, which I regretted almost immediately as I worked my way through a flurry of elbows and feet. Once the pack spread out a little, I gave up trying to see the first tiny buoy and caught a draft until I could see the lifeguard sitting near the buoy. This swim was stacked with aggressive swimmers, and that was on full display at the turns. In almost no time we were at the next buoy and riding the waves back into shore. The water was so clear I found myself reaching for the bottom while it was still feet away. I stood up, didn’t fall over, ran up the beach and around the turn, still didn’t fall over, and then it was back into the water where I misjudged a wave and popped up from my dolphin dive right as it was breaking on my head. A minor setback, and aside from being blocked in behind some swimmers going slower than I wanted, the second lap was uneventful. I came in just under 1:30 pace, which I’m satisfied with given the conditions.

I ran up the beach, didn’t fall over, dropped my cap and goggles, congratulated myself for my no-wetsuit decision as I watched other racers struggling with theirs, and went looking for hard sand to run on.

One of the slow swimmers I’d finally gotten around at the end of the second lap passed me before my legs started working, so I decided to chase her. I found Isabelle and ran with her while we dodged surfers and hurdled over toddlers. At each turnaround, we had to leave the water’s edge and run through increasingly dry sand, which added a whole extra element to plotting our course. A USC girl wiped out right as I was coming into the first turn, so I took it easy. At the beginning of the second lap, I developed a sharp side stitch and hobbled along for a half mile or so trying in vain to make it stop, and when it eased up I had to go catch a bunch of people who had passed me while I was struggling to breathe and run at the same time. Making up time was my main focus for the rest of the run, although I did have to pay enough attention to avoid other racers coming the opposite way, kids hauling handfuls of dripping sand across the beach, and people out for walks on the racecourse. I had enough left for a kick, and even with the slowdown I was happy with my run, and satisfied with 8th in the collegiate division.

Drew, Isabelle, Brody, Jesse, and I walked up the beach looking for Victoria and Taylor and Chris. They all thought we were cheering for them because they were near the end and laid down truly inspiring kicks. We all rinsed off and ate some burgers, stuck around for awards, and then headed home and I took a lovely nap.